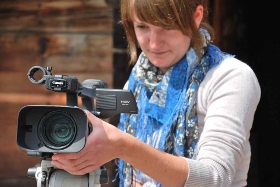 In 1997 Prof. Dr. Frank Heidemann established a strong focus on Visual Anthropology at the Munich Institute of Social and Cultural Anthropology. Lectures, seminars as well as practical research and film courses are offered on a regular basis.

Since Visual Anthropology deals with production as well as perception of audiovisual representations, teaching also involves both aspects. Hands-on seminars provide (ethnographic) film theory and analysis, combined with the empirical process of research and filming. Students engage in questions of ethics, representation and perception of social realities, and explore the potential of audiovisual media in an anthropological context.

Seminars with a more theoretical approach broach the broad field of visual culture; they take up, for example, fiction film and cinema as spaces of cultural production. The debate goes far beyond a narrow understanding of "ethnographic film", but instead challenges the limits of genres and opens up towards other disciplines such as film studies, art, and literature.